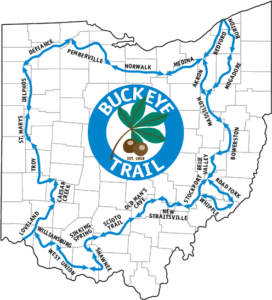 On June 15, 2011, Andy “Captain Blue” Niekamp became a hometown hero when he completed the first solo thru-hike of the 1,444 mile Buckeye Trail. His was not the first thru-hike of the Buckeye Trail, neither was it the first solo hike. A few before him had also solo hiked the trail from end-to-end. The significance of Captain Blue’s accomplishment is that he is the first to complete the trail as a solo, single continuous journey at its current 1,444-mile length.

Building the Buckeye Trail to its current length was a process that took years. The trail was originally envisioned in 1958 as a 500-mile diagonal footpath that stretched from the banks of the Ohio River in Cincinnati to Conneaut on the shores of Lake Erie. The loop around the four corners of Ohio was completed in sections and finally closed by 1993. The trail continued to evolve as it was revised, rerouted, and expanded to include more off-road miles, significant landmarks, and additional historic places. In 2005, the Buckeye Trail reached its current 1,444 mile length, the longest circular trail in the U.S. to date.

When Captain Blue laced up his hiking boots and shouldered his backpack in the spring of 2011, even he wasn’t sure the Buckeye Trail was a hike he wanted to complete. It’s not a trail that appeals to most long-distance hikers. The challenge, but also the draw of the Buckeye Trail, is that it winds through wilderness, farmland, small towns, big cities, rural and urban areas. However, as Captain Blue re-discovered his home state on foot, a transformation began and a story took shape.

All readers will appreciate the literary theme of the hero’s journey—the ordinary person who, with the nurture of community, faces obstacles and challenge after challenge until the journey transforms the hero into someone extraordinary, someone who emerges better, stronger, and wiser.

This story is about tenacity, perseverance, friendship, love, blind faith in humanity, personal resourcefulness, and a healthy dose of German stubbornness. It’s a story worth reading.

I invite you on this unforgettable journey with Captain Blue. Such a journey is within the grasp of us all.

BEFORE THE HIKE – THE IDEA MOVES FORWARD

I’m an Ohio boy from Kettering, a suburb of Dayton, who likes to hike long distances. It all began…well mostly began…in 1989 when I hiked 35 miles on the Appalachian Trail (AT) in the Great Smoky Mountains National Park. I got whupped by the trail and hooked at the same time.

I returned the next year to walk all 70 miles of the Appalachian Trail in the Great Smokies and then 105 miles in Shenandoah National Park. I’ve been hiking continuous, multi-day journeys ever since. Just a few months ago, I completed the 2,179-mile Appalachian Trail, end-to-end, for the third time. Only 30 other people besides me have successfully reported hiking the entire AT three times.

At the moment, I’m in Orange Beach, Alabama, a resort town with spectacular beach front on the Gulf of Mexico. I’ve been migrating here for a month-long hiatus every winter since 2008. I drive down to escape the Ohio winter and to plan hiking trips for the year. I’m itching to plan a new adventure.

Wilderness trails appeal to me. It’s nature up close and personal. There are no wilderness trails in Ohio, so I’ve never done much backpacking in my home state. However, it’s not for lack of long-distance trails. Many trails traverse Ohio: the North Country Trail, the American Discovery Trail, the North Coast Inland Trail, and a very, very long circular trail around the state called the Buckeye Trail.

The Buckeye Trail has a unique appeal because it’s exclusive to Ohio. Most hikers chip away at the 1,444 miles of trail by walking in short sections. That takes a very long time. Some folks I know have been hiking the Buckeye Trail for years. It dawned on me during one of my morning walks on the beach that if I hiked the trail in a single, continuous journey, I could complete a thru-hike of the Buckeye Trail in just a matter of a few months.

The time seems right. The Buckeye Trail Association Trail Talk discussion board recently debuted. The discussion board is a place where Buckeye Trail hikers can connect. Hikers ask questions, share information, and give advice. Reading other hikers’ comments and questions planted the seed that a thru-hike might be do-able. The more I thought about hiking the 1,444 miles of the Buckeye Trail in a single journey, the more I was drawn to the idea. It’s a difficult trail to thru-hike, though. Few have done it since the trail was completed as a closed circuit loop. I would be only the sixth person to thru-hike it.

DAY 13 – TOWNS AND CITIES VERSUS TREES AND FOREST

Pemberville continued its trail magic. A traveling salesman picked up my tab at breakfast this morning at the local diner. He was impressed with my journey and wanted to help. I stopped by the post office to mail home a few things I was carrying I did not need. The postmaster was very helpful, too.

The route today was entirely on pavement. The first ten miles to Elmore were on roads. The route was scenic as it generally followed the Portage River.

Traffic was light but there were hills and blind curves which made me nervous from a safety point of view. Drivers aren’t used to seeing pedestrians on the road and may be startled. When hiking on roads, I try to alert drivers by wearing an orange safety vest and covering my pack in orange. Even so, I am wary of oncoming traffic and get way off the road when in doubt.

Luckily, the second part of the hike today was on the North Coast Inland Trail (NCIT). The NCIT is an all-purpose trail that, when finished, will connect Pennsylvania to Indiana. The Ohio Bikeways rail-trail system is part of the NCIT. Rail-trail is the name given to unused portions of railroad tracks that are sold to municipalities for conversion to bike and walking paths. Rail-trail conversions are occurring not just in the United States, but all over the world. Old rail routes make excellent paths because they were engineered to be fairly flat and straight; inclines are graded. For the hiker and biker, it’s a safer way to travel.

The NCIT went right through the middle of Lindsey, a small town of about 450 people. Lindsey’s history dates back to the 1850s. No doubt a village birthed by the railroad after the Civil War when the railroad was fast becoming king.

Every so often along the trail, I see a weathered stone railway mile marker or a “W” (to tell the engineer to blow a warning whistle at a road crossing) which reminds me that I’m walking along the path of travel that served as the fastest form of transportation in the early 1900s. The old markers are also a reminder that, just like the canals, the railroads, too, were displaced by faster and more convenient forms of transportation.

I’m starting to appreciate that the Buckeye Trail traverses towns. Wilderness trails, like the Appalachian Trail, route the hiker out of towns and cities, away from civilization in order to keep the hiker in the natural environment. The Buckeye Trail, on the other hand, is about discovering Ohio.